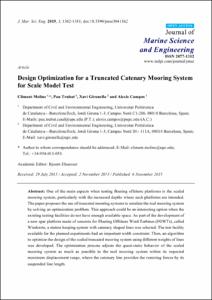 Campos Hortigüela, Alexis
Document typeArticle
Rights accessOpen Access
Abstract
One of the main aspects when testing floating offshore platforms is the scaled mooring system, particularly with the increased depths where such platforms are intended. The paper proposes the use of truncated mooring systems to emulate the real mooring system by solving an optimization problem. This approach could be an interesting option when the existing testing facilities do not have enough available space. As part of the development of a new spar platform made of concrete for Floating Offshore Wind Turbines (FOWTs), called Windcrete, a station keeping system with catenary shaped lines was selected. The test facility available for the planned experiments had an important width constraint. Then, an algorithm to optimize the design of the scaled truncated mooring system using different weights of lines was developed. The optimization process adjusts the quasi-static behavior of the scaled mooring system as much as possible to the real mooring system within its expected maximum displacement range, where the catenary line provides the restoring forces by its suspended line length.
CitationMolins, C., Trubat, P., Gironella, F., Campos, A. Design optimization for a truncated catenary mooring system for scale model test. "Journal of Marine Science and Engineering", 2015, vol. 3, núm. 4, p. 1362-1381.
URIhttp://hdl.handle.net/2117/78914
DOI10.3390/jmse3041362
ISSN2077-1312
Publisher versionhttp://www.mdpi.com/2077-1312/3/4/1362
Collections
Share: