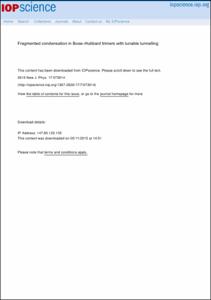 Show full item record
Gallemí, A.
Guilleumas, M.
Martorell, J.
Mayol, R.
Polls, A.
Juliá-Díaz, Bruno
Document typeArticle
PublisherIOP
Rights accessOpen Access
Abstract
We consider a Bose–Hubbard (BH) trimer, i.e. an ultracold Bose gas populating three quantum states. The latter can be either different sites of a triple-well potential or three internal states of the atoms. The bosons can tunnel between different states with variable tunnelling strength between two of them. This will allow us to study; (i) different geometrical configurations, i.e. from a closed triangle to three aligned wells and (ii) a triangular configuration with a π-phase, i.e. by setting one of the tunnellings negative. By solving the corresponding three-site BH Hamiltonian we obtain the ground state of the system as a function of the trap topology. We characterize the different ground states by means of the coherence and entanglement properties. For small repulsive interactions, fragmented condensates are found for the π-phase case. These are found to be robust against small variations of the tunnelling in the small interaction regime. A low-energy effective many-body Hamiltonian restricted to the degenerate manifold provides a compelling description of the π-phase degeneration and explains the low-energy spectrum as excitations of discrete semifluxon states.
URIhttp://hdl.handle.net/2117/78833
ISSN1367-2630
Publisher versionhttp://iopscience.iop.org/article/10.1088/1367-2630/17/7/073014/meta
Collections
Share: