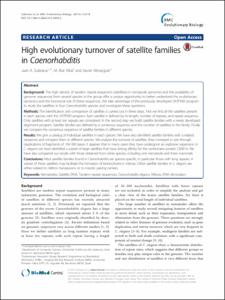 Document typeArticle
Rights accessOpen Access
Abstract
Background: The high density of tandem repeat sequences (satellites) in nematode genomes and the availability of genome sequences from several species in the group offer a unique opportunity to better understand the evolutionary dynamics and the functional role of these sequences. We take advantage of the previously developed SATFIND program to study the satellites in four Caenorhabditis species and investigate these questions.; Methods: The identification and comparison of satellites is carried out in three steps. First we find all the satellites present in each species with the SATFIND program. Each satellite is defined by its length, number of repeats, and repeat sequence. Only satellites with at least ten repeats are considered. In the second step we build satellite families with a newly developed alignment program. Satellite families are defined by a consensus sequence and the number of satellites in the family. Finally we compare the consensus sequence of satellite families in different species.; Results: We give a catalog of individual satellites in each species. We have also identified satellite families with a related sequence and compare them in different species. We analyze the turnover of satellites: they increased in size through duplications of fragments of 100-300 bases. It appears that in many cases they have undergone an explosive expansion. In C. elegans we have identified a subset of large satellites that have strong affinity for the centromere protein CENP-A. We have also compared our results with those obtained from other species, including one nematode and three mammals.; Conclusions: Most satellite families found in Caenorhabditis are species-specific; in particular those with long repeats. A subset of these satellites may facilitate the formation of kinetochores in mitosis. Other satellite families in C. elegans are either related to Helitron transposons or to meiotic pairing centers.
CitationSubirana, J., Albà, M., Messeguer, X. High evolutionary turnover of satellite families in Caenorhabditis. "BMC evolutionary biology", 05 Octubre 2015, vol. 15:218, p. 1-13.
URIhttp://hdl.handle.net/2117/78807
DOI10.1186/s12862-015-0495-x
ISSN1471-2148
Publisher versionhttp://www.biomedcentral.com/1471-2148/15/218
Collections
Share: