A swarm of femtosatellites for lower thermospheric density determination. 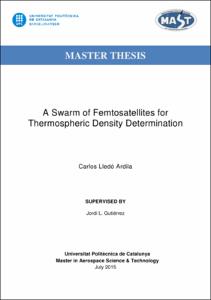 Document typeMaster thesis
Rights accessOpen Access
Abstract
The Lower thermosphere (between 80 and 350 km) is quite badly known due to the scarcity of satellites in this region. Nevertheless, it is an important region in several respects. Firstly, because its density determines when a falling satellite will reenter the dense layers of the atmosphere, thus affecting at reentry predictions. Secondly, it is highly relevant to understand physical processes in the atmosphere, and to study the Earth-Sun relation. Miniaturization of electronic devices has been driven in recent years by consumer applications like smartphones and computers. However, these electronic devices can also be employed to design small but rather capable satellites with total masses below 100 grams, thus in the range of femtosatellites. Given the limited capabilities of femtosatellites in terms of power, computational capability, attitude determination and control, to cite just a few, it is important to identify the advantages of femtosatellites as compared with their larger relatives. As far as we can see, the main advantages are in cost (including launch cost) and on the possibility of launching swarms of dozens, hundreds or even thousands of femtosatellites. In any case, it is obvious that femtosatellites cannot (and should not) compete with larger satellites devoted to, for example, meteorology, communications or astronomy, at least in their standard ways of operation. To fix the terminology, a swarm is defined as a cluster of satellites that has no control over their relative position (thus has no formation-flight nor constellation control capabilities) and are distributed over a wide area, even surrounding the whole Earth, to accomplish some mission goals. Then, a large number of femtosatellites of spherical shape would provide an instantaneous determination of atmospheric parameters simultaneously in a large number of points. These femtosatell ites would include three micro-g accelerometers (to calculate the acceleration in the three axes), a microprocessor with low power consumption, a GPS, a flash memory, voltage regulators and a transmitter plus a primary battery (with a high energetic density) to feed all the systems. All these electronics, and the rest needed to perform the bus of the satellite, would be embedded in a sphere of aerogel to resist the aerodynamic heating, and the effects of atomic oxygen. Due to their spherical shape, the ballistic coefficient for these femtosatellites is independent of the attitude. As it is reasonable, the lower the ballistic coefficient the larger the deceleration due to drag; this makes for a better measure of the acceleration, but greatly reduces the lifetime in orbit. A compromise would be to have around 1 week of orbital lifetime, and accelerations of some micro-g's. The main objectives of this project would be: an analysis of the current knowledge about the lower thermosphere; discussing the general trends of the mission as a whole, and describing some further difficulties or problems associated with them; making a preliminary design of the femtosatellite based on commercial- off-the-shelf (COTS) technology; and describing some possible future developments.
SubjectsArtificial satellites, Thermosphere, Satèl·lits artificials, Termosfera
URIhttp://hdl.handle.net/2117/78768
Collections
Share: