Vortex macroscopic superpositions in ultracold bosons in a double-well potential 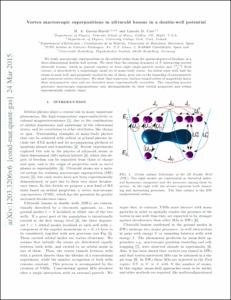 We study macroscopic superpositions in the orbital rather than the spatial degrees of freedom, in a three-dimensional double-well system. We show that the ensuing dynamics of N interacting excited ultracold bosons, which in general requires at least eight single-particle modes and N+7 N Fock vectors, is described by a surprisingly small set of many-body states. An initial state with half the atoms in each well, and purposely excited in one of them, gives rise to the tunneling of axisymmetric and transverse vortex structures. We show that transverse vortices tunnel orders of magnitude faster than axisymmetric ones and are therefore more experimentally accessible. The tunneling process generates macroscopic superpositions only distinguishable by their orbital properties and within experimentally realistic times.
URIhttp://hdl.handle.net/2117/78739
ISSN1050-2947
Publisher versionhttp://journals.aps.org/pra/abstract/10.1103/PhysRevA.91.033626