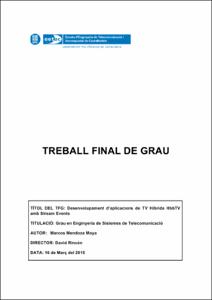 Document typeBachelor thesis
Rights accessOpen Access
Abstract
Connected television is currently one of the most important technological phenomenon in the telecommunication sector. In Europe, the Hybrid Broadcast Broadband TV (HbbTV) standard dominates, while its competitor, the Ginga-NCL middleware, is strong in Latin America. These standards have a common goal: providing access to interactive applications and content on demand to TV consumers, independently of its terminal or device. In this Degree Thesis we have implemented an HbbTV application that offers a service of synchronized video delivery for video parties. The application allows the streaming of musical clips with streaming route, allowing the users to create lists, add their favourite songs, and influence the playing order using a voting system. All these operations can be performed in real time, adapting to the participants of the party. The application uses the advanced features provided by the HbbTV standard, such as the synchronisation between terminals via the signalling of Stream Events through the broadcast of DVB-T (Digital Video Broadcasting) flows. We have also developed a mobile application in addition to the HbbTV application, to improve the interactivity of users, and a (limited) Ginga version of the HbbTV application. The developments have been carried out with the help of both emulators and real HbbTV receivers. In addition, a realistic broadcast emission scenario has been recreated, including the whole chain of broadcasting (generation of a Transport Stream with HbbTV application and the indicated stream events, transmission of modulated DVB-T signal, reception of the HbbTV application and also the Stream Events in the compatible standard terminals (a Smart TV and a Set-top box) Finally, the HbbTV application has been tested with different receiver devices. The results showed that the behaviour is not the same in all device, what forced us to generate different versions of the code adapted to each one. The Ginga application could only be tested with an emulator.
SubjectsStreaming technology (Telecommunications), Vídeo -- Transmissió
URIhttp://hdl.handle.net/2117/78707
Collections
Share: