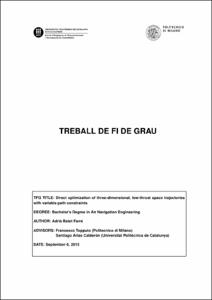 Low-thrust propulsion systems are growing in popularity for both Earth orbiting satellites and scientific spacecraft on interplanetary missions. This is thanks to the ability of these systems of traveling during more time and in a more efficient way. Moreover, space trajectories can be optimized in time or fuel by defining an optimal control problem and solving it via indirect or direct methods. Therefore, through this project a solver to optimize, via direct transcription and collocation, three-dimensional, low-thrust space trajectories with variable path constraints in a time or fuel optimal way will be implemented. For doing so, we will first talk about the advantages of low-thrust propulsion for long missions when compared to the chemical ones. Once these systems will have been introduced, we will define the optimal control problem via direct transcription and collocation. Also, we will see how low-thrust orbital transfers can be defined as an optimal control problem in order to be optimized for the transfer time or fuel consumption, including the mass flow equation in the dynamics of the problem and the decrease of available thrust that the engine will suffer as it moves away from the Sun as the path constraint. Then, we will implement the optimization solver using Matlab and the open source software package for large-scale nonlinear optimization IPOPT. This code will be organized in a logical way according to the optimal control problems resolution with IPOPT in order to ease its understanding and to enhance its clarity. Finally, some examples will be run in order to display their results and compare them. These examples will be defined using CubeSats with two different models of electro-spray propulsion engines, which have been proportioned by the department of aerospace science and technology of the Politecnico di Milano. This way, we will achieve a more realistic approach. Both models will be used for both time and fuel optimal problems, in order to prove the validity of the solver. The low-thrust orbital transfers stated will be between the Earth's orbit around the Sun and a ballistic capture precomputed point from where the spacecraft will be "picked up" by Mars.
SubjectsPropulsion systems, Nanosatellites, Sistemes de propulsió
URIhttp://hdl.handle.net/2117/78661