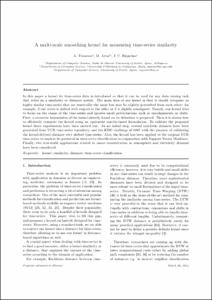 Riquelme Santos, José Cristóbal
Document typeArticle
Rights accessOpen Access
All rights reserved. This work is protected by the corresponding intellectual and industrial property rights. Without prejudice to any existing legal exemptions, reproduction, distribution, public communication or transformation of this work are prohibited without permission of the copyright holder
ProjectMINERIA EN DATOS BIOLOGICOS Y SOCIALES: ALGORITMOS, TEORIA E IMPLEMENTACION (MICINN-TIN2011-27479-C04-03)
Abstract
In this paper a kernel for time-series data is introduced so that it can be used for any data mining task that relies on a similarity or distance metric. The main idea of our kernel is that it should recognize as highly similar time-series that are essentially the same but may be slightly perturbed from each other: for example, if one series is shifted with respect to the other or if it slightly misaligned. Namely, our kernel tries to focus on the shape of the time-series and ignores small perturbations such as misalignments or shifts. First, a recursive formulation of the kernel directly based on its definition is proposed. Then it is shown how to efficiently compute the kernel using an equivalent matrix-based formulation. To validate the proposed kernel three experiments have been carried out. As an initial step, several synthetic datasets have been generated from UCR time-series repository and the KDD challenge of 2007 with the purpose of validating the kernel-derived distance over shifted time-series. Also, the kernel has been applied to the original UCR time-series to analyze its potential in time-series classification in conjunction with Support Vector Machines. Finally, two real-world applications related to ozone concentration in atmosphere and electricity demand have been considered.
CitationTroncoso, A., Arias, M., Riquelme, J.C. A multi-scale smoothing kernel for measuring time-series similarity. "Neurocomputing", 01 Novembre 2015, vol. 167, p. 8-17.
URIhttp://hdl.handle.net/2117/78645
DOI10.1016/j.neucom.2014.08.099
ISSN0925-2312
Publisher versionhttp://www.sciencedirect.com/science/article/pii/S0925231215005585
Collections
Share: