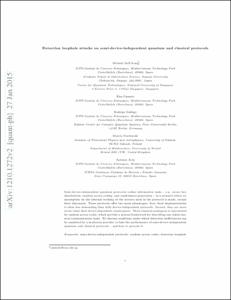 Show full item record
Dall’Arno, Michele
Passaro, Elsa
Gallego, Rodrigo
Pawlowski, Marcin
Acín, Antonio
Document typeArticle
PublisherRinton Press
Rights accessOpen Access
Abstract
Semi-device-independent quantum protocols realize information tasks – e.g. secure key distribution, random access coding, and randomness generation – in a scenario where no assumption on the internal working of the devices used in the protocol is made, except their dimension. These protocols offer two main advantages: first, their implementation is often less demanding than fully-device-independent protocols. Second, they are more secure than their device-dependent counterparts. Their classical analogous is represented by random access codes, which provide a general framework for describing one-sided classical communication tasks. We discuss conditions under which detection inefficiencies can be exploited by a malicious provider to fake the performance of semi-device-independent quantum and classical protocols – and how to prevent it.
URIhttp://hdl.handle.net/2117/78576
ISSN1533-7146
Publisher versionhttp://www.rintonpress.com/journals/qiconline.html#v15n12
Collections
Share: