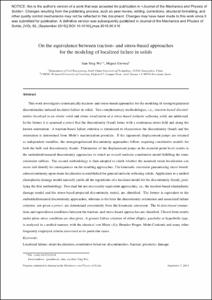 Document typeArticle
Rights accessOpen Access
Abstract
This work investigates systematically traction- and stress-based approaches for the modeling of strong and regularized discontinuities induced by localized failure in solids. Two complementary methodologies, i.e., discontinuities localized in an elastic solid and strain localization of an inelastic softening solid, are addressed. In the former it is assumed a priori that the discontinuity forms with a continuous stress field and along the known orientation. A traction-based failure criterion is introduced to characterize the discontinuity and the orientation is determined from Mohr's maximization postulate. If the displacement jumps are retained as independent variables, the strong/regularized discontinuity approaches follow, requiring constitutive models for both the bulk and discontinuity. Elimination of the displacement jumps at the material point level results in the embedded/smeared discontinuity approaches in which an overall inelastic constitutive model fulfilling the static constraint suffices. The second methodology is then adopted to check whether the assumed strain localization can occur and identify its consequences on the resulting approaches. The kinematic constraint guaranteeing stress boundedness and continuity upon strain localization is established for general inelastic softening solids. Application to a unified stress-based elastoplastic damage model naturally yields all the ingredients of a localized model for the discontinuity (band), justifying the first methodology. Two dual but not necessarily equivalent approaches, Le., the traction-based elastoplastic damage model and the stress-based projected discontinuity model, are identified. The former is equivalent to the embedded and smeared discontinuity approaches, whereas in the later the discontinuity orientation and associated failure criterion are determined consistently from the kinematic constraint rather than given a priori. The bidirectional connections and equivalence conditions between the traction- and stress-based approaches are classified. Closed-form results under plane stress condition are also given. A generic failure criterion of either elliptic, parabolic or hyperbolic type is analyzed in a unified manner, with the classical von Mises (J(2)), Drucker-Prager, Mohr-Coulomb and many other frequently employed criteria recovered as its particular cases.
CitationWu, J., Cervera, M. On the equivalence between traction- and stress-based approaches for the modeling of localized failure in solids. "Journal of the mechanics and physics of solids", Setembre 2015, vol. 82, p. 137-163.
URIhttp://hdl.handle.net/2117/78534
DOI10.1016/j.jmps.2015.05.016
ISSN0022-5096
Publisher versionhttp://www.sciencedirect.com/science/article/pii/S0022509615001210
Collections
Share: