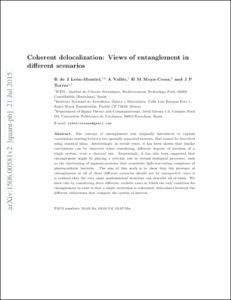 Tipus de documentArticle
EditorIOP
Condicions d'accésAccés obert
Abstract
The concept of entanglement was originally introduced to explain correlations existing between two spatially separated systems, that cannot be described using classical ideas. Interestingly, in recent years, it has been shown that similar correlations can be observed when considering different degrees of freedom of a single system, even a classical one. Surprisingly, it has also been suggested that entanglement might be playing a relevant role in certain biological processes, such as the functioning of pigment-proteins that constitute light-harvesting complexes of photosynthetic bacteria. The aim of this work is to show that the presence of entanglement in all of these different scenarios should not be unexpected, once it is realized that the very same mathematical structure can describe all of them. We show this by considering three different, realistic cases in which the only condition for entanglement to exist is that a single excitation is coherently delocalized between the different subsystems that compose the system of interest.
URIhttp://hdl.handle.net/2117/78511
ISSN1612-2011
Versió de l'editorhttp://iopscience.iop.org/article/10.1088/1612-2011/12/8/085204
Col·leccions
Comparteix: