The start of lightning: evidence of bidirectional lightning initiation 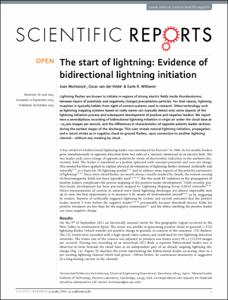 Williams, Earle R.
Document typeArticle
PublisherMacmillan Publishers
Rights accessOpen Access
Abstract
Lightning flashes are known to initiate in regions of strong electric fields inside thunderstorms, between layers of positively and negatively charged precipitation particles. For that reason, lightning inception is typically hidden from sight of camera systems used in research. Other technology such as lightning mapping systems based on radio waves can typically detect only some aspects of the lightning initiation process and subsequent development of positive and negative leaders. We report here a serendipitous recording of bidirectional lightning initiation in virgin air under the cloud base at ~11,000 images per second, and the differences in characteristics of opposite polarity leader sections during the earliest stages of the discharge. This case reveals natural lightning initiation, propagation and a return stroke as in negative cloud-to-ground flashes, upon connection to another lightning channel – without any masking by cloud.
CitationMontaña, J., Van Der Velde, O., Williams, E.R. The start of lightning: evidence of bidirectional lightning initiation. "Scientific reports", 18 Octubre 2015, vol. 5, núm. 15180.
URIhttp://hdl.handle.net/2117/78493
DOI10.1038/srep15180
ISSN2045-2322
Publisher versionhttp://www.nature.com/srep/
Collections
Share: