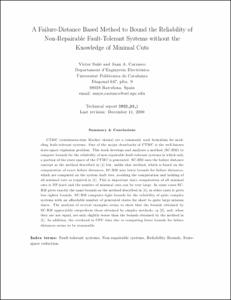 Document typeResearch report
Rights accessOpen Access
All rights reserved. This work is protected by the corresponding intellectual and industrial property rights. Without prejudice to any existing legal exemptions, reproduction, distribution, public communication or transformation of this work are prohibited without permission of the copyright holder
Abstract
CTMC (continuous-time Markov chains) are a commonly used formalism for modeling fault-tolerant systems. One of the major drawbacks of CTMC is the well-known state-space explosion problem. This work develops and analyzes a method (SC-BM) to compute bounds for the reliability of non-repairable fault-tolerant systems in which only a portion of the state space of the CTMC is generated. SC-BM uses the failure distance concept as the method described in [1] but, unlike that method, which is based on the computation of exact failure distances, SC-BM uses lower bounds for failure distances, which are computed on the system fault tree, avoiding the computation and holding of all minimal cuts as required in [1]. This is important since computation of all minimal cuts is NP-hard and the number of minimal cuts can be very large. In some cases SCBM gives exactly the same bounds as the method described in [1]; in other cases it gives less tighter bounds. SC-BM computes tight bounds for the reliability of quite complex systems with an affordable number of generated states for short to quite large mission times. The analysis of several examples seems to show that the bounds obtained by SC-BM appreciably outperform those obtained by simpler methods, eg [2], and, when they are not equal, are only slightly worse than the bounds obtained by the method in [1]. In addition, the overhead in CPU time due to computing lower bounds for failure distances seems to be reasonable.
Is part ofDMSD_99_1
URIhttp://hdl.handle.net/2117/7846
Collections
Share: