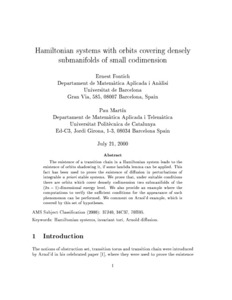 The existence of a transition chain in a Hamiltonian system leads to the existence of orbits shadowing it, if some lambda lemma can be applied. This fact has been used to prove the existence of diffusion in perturbations of integrable a priori stable systems. We prove that, under suitable conditions, there are orbits which cover densely codimension two submanifolds of the (2n - 1)-dimensional energy level. We also construct examples, near general integrable systems, where the computations to verify the sufficient conditions for the appearance of such phenomenon can be performed.
URIhttp://hdl.handle.net/2117/784