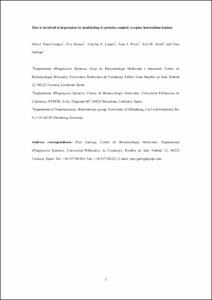 Document typeArticle
Rights accessOpen Access
Abstract
5-Hydroxytryptamine 1A receptor and galanin receptor 1 belong to the G protein-coupled receptors superfamily, and they have been described to heterodimerize triggering an anomalous physiological state that would underlie depression. Zinc supplementation has been widely reported to improve treatment against major depressive disorder. Our work has focused on the study and characterization of these receptors and its relationships with zinc both under purified conditions and in cell culture. To this aim, we have designed a strategy to purify the receptors in a conformationally active state. We have used receptors tagged with the monoclonal Rho-1D4 antibody and employed ligand-assisted purification in order to successfully purify both receptors in a properly folded and active state. The interaction between both purified receptors has been analyzed by surface plasmon resonance in order to determine the kinetics of dimerization. Zinc effect on heteromer has also been tested using the same methodology but exposing the 5-hydroxytryptamine 1A receptor to zinc before the binding experiment. These results, combined with Förster resonance energy transfer (FRET) measurements, in the absence and presence of zinc, suggest that this ion is capable of disrupting this interaction. Moreover, molecular modeling suggests that there is a coincidence between zinc-binding sites and heterodimerization interfaces for the serotonin receptor. Our results establish a rational explanation for the role of zinc in the molecular processes associated with receptor-receptor interactions and its relationship with depression, in agreement with previously reported evidence for the positive effects of zinc in depression treatment, and the involvement of our target dimer in the same disease.
Description
The final publication is available at Springer via http://dx.doi.org/10.1007/s12035-015-9153-y
CitationTena, M., Ramon, E., S. Lupala, C., Perez, J., Koch, K., Garriga, P. Zinc is involved in depression by modulating G-protein-coupled receptor heterodimerization. "Molecular neurobiology", April 2016, vol. 53, núm. 3, p. 2003-2015
URIhttp://hdl.handle.net/2117/78321
DOI10.1007/s12035-015-9153-y
ISSN0893-7648
Collections
Share: