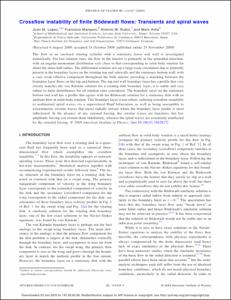 Rubio, Antonio M.
Àvila Cañellas, Marc
Document typeArticle
Rights accessOpen Access
Abstract
The flow in an enclosed rotating cylinder with a stationary lower end wall is investigated numerically. For fast rotation rates, the flow in the interior is primarily in the azimuthal direction, with an angular momentum distribution very close to that corresponding to solid-body rotation for about the inner-half radius. The differential rotation sets up a large-scale circulation that is primarily present in the boundary layers on the rotating top and sidewalls and the stationary bottom wall, with a very weak effusive component throughout the bulk interior providing a matching between the boundary layer flows on the top and bottom. The top end wall boundary layer has a profile that very closely matches the von Kármán solution for a rotating disk boundary layer; it is stable and very robust to finite disturbances for all rotation rates considered. The boundary layer on the stationary bottom end wall has a profile that agrees with the Bödewadt solution for a stationary disk with an ambient flow in solid-body rotation. This boundary layer is not robust, suffering crossflow instability to multiarmed spiral waves via a supercritical Hopf bifurcation, as well as being susceptible to axisymmetric circular waves that travel radially inward where the boundary layer profile is most inflectional. In the absence of any external forcing, the circular waves are transitory, but low amplitude forcing can sustain them indefinitely, whereas the spiral waves are essentially unaffected by the external forcing.
CitationLópez, J. [et al.]. Crossflow instability of finite Bödewadt flows: transients and spiral waves. "The physics of fluids", Novembre 2009, vol. 21, núm. 11, p. 114107-1-114107-9.
URIhttp://hdl.handle.net/2117/7825
DOI10.1063/1.3262817
ISSN0031-9171
Publisher versionhttp://link.aip.org/link/PHFLE6/v21/i11/p114107/s1
Collections
Share: