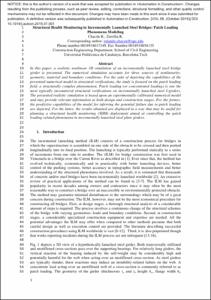 Except where otherwise noted, content on this work is licensed under a Creative Commons license : Attribution-NonCommercial-NoDerivs 3.0 Spain
Abstract
In this paper, a realistic nonlinear 3D simulation of an incrementally launched steel bridge girder is presented. The numerical simulation accounts for three sources of nonlinearity: geometry, material and boundary conditions. For the sake of depicting the capabilities of the presented numerical model in structural verifications, the study is focused on the patch loading field, a structurally complex phenomenon. Patch loading (or concentrated loading) is one of the most typically encountered structural verifications on incrementally launched steel 1-girders. The presented realistic simulation is based upon an experimentally calibrated numerical model and may provide relevant information at both design and construction stages. For the former, the predictive capabilities of the model for inferring the potential failure due to patch loading are depicted. For the latter, the results obtained are displayed in a way that may be useful for planning a Structural Health Monitoring (SHM) deployment aimed at controlling the patch loading-related phenomena in incrementally launched steel plate girders.
CitationChacon, R., Zorrilla, R. Structural health monitoring in incrementally launched steel bridges: patch loading phenomena modeling. "Automation in construction", Octubre 2015, vol. 58, p. 60-73.
URIhttp://hdl.handle.net/2117/78202
DOI10.1016/j.autcon.2015.07.001
ISSN0926-5805
Publisher versionhttp://www.sciencedirect.com/science/article/pii/S0926580515001442
Collections
Share: