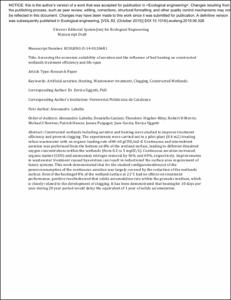 Except where otherwise noted, content on this work is licensed under a Creative Commons license : Attribution-NonCommercial-NoDerivs 3.0 Spain
ProjectARBI - Autonomous Reed Bed Installations (EC-FP7-606326)
Abstract
Constructed wetlands including aeration and heating were studied to improve treatment efficiency and prevent clogging. The experiments were carried out in a pilot plant (0.4 m(2)) treating urban wastewater with an organic loading rate of 40-60 g COD/m(2) d. Continuous and intermittent aeration was performed from the bottom on 8% of the wetland surface, leading to different dissolved oxygen concentrations within the wetlands (from 0.2 to 5 mg O-2/L). Continuous aeration increased organic matter (COD) and ammonium nitrogen removal by 56% and 69%, respectively. Improvements in wastewater treatment caused by aeration can result in reduction of the surface area requirement of future systems. This work demonstrated that for the studied configuration the cost of the power consumption of the continuous aeration was largely covered by the reduction of the wetlands surface. Even if the heating of 8% of the wetland surface at 21 degrees C had no effects on treatment performance, positive results showed that solids accumulation rate within the granular medium, which is closely related to the development of clogging. It has been demonstrated that heating for 10 days per year during 20 year period would delay the equivalent of 1 year of solids accumulation.
CitationLabella, A., Caniani, D., Hughes, T., Morrison, R., Newton, M., Hawes, P., Puigagut, J., Garcia, J., Uggetti, E. Assessing the economic suitability of aeration and the influence of bed heating on constructed wetlands treatment efficiency and life-span. "Ecological engineering", Octubre 2015, vol. 83, p. 184-190.
URIhttp://hdl.handle.net/2117/78083
DOI10.1016/j.ecoleng.2015.06.028
ISSN0925-8574
Publisher versionhttp://www.sciencedirect.com/science/article/pii/S0925857415300847
Collections
Share: