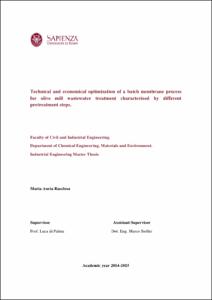 Olive Mill Wastewater is a heavy polluted liquid stream exiting the olive oil production process. It is a critical environmental problem due to the quantity of organic and inorganic matter that contains. Lots of studies have been done in order to improve the treatment of this wastewater. This thesis has been focused in the treatment of OMWW by an ultrafiltration process preceded by different pretreatments as sieving, coagulation‐flocculation or photocatalysis. Different variants of the treatments have been carried out; two samples of OMWW have been treated using HNO3 as reagent, one pretreated just by a coagulation‐flocculation and the other also with a photocatalytic process, and two other samples using H2SO4, also one pretreated by just a coagulation‐flocculation process and the other also by a photocatalytic process. Comparing the different variants of the treatment has been seen that for those treatments using HNO3 as reagent the COD of the Ultrafiltration feedstream is lower when besides the flocculation it has also been done the photocatalysis. This fact does not happen for the samples treated using H2SO4 because the photocatalysis carried out using H2SO4 has a really low COD reduction. Concerning the economic costs, it has been observed that the treatments using HNO3 are more expensive than the ones using H2SO4 and that the photocatalysis increases considerably the cost of the treatment. Moreover, has been studied the evolution of the treatment cost when the volume of OMWW treated increase, and it has been seen that the costs tend to stabilize quickly after an abrupt reduction at the beginning. After a comparison between the treatment costs and the cost of the OMWW scattering has been observed that from a small amount of OMWW, its treatment is more profitable than its scattering both in economic and environmental terms. Future research is needed for a better understanding of the behavior of H2SO4 as reagent because it could be a good economical alternative in the treatment of OMWW.
SubjectsSewage -- Purification, Membranes (Technology), Olive oil industry -- Environmental aspects, Aigües residuals -- Depuració, Membranes (Tecnologia), Oli d'oliva -- Indústria i comerç -- Aspectes ambientals
URIhttp://hdl.handle.net/2117/78011