Design of a wrap yarn prototype 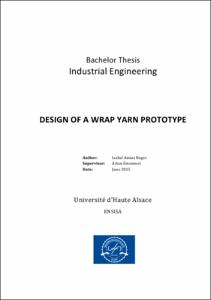 Show full item record
Amías Roget, Isabel
Tutor / director / evaluatorSinoimeri, Artan
Document typeBachelor thesis
Rights accessOpen Access
Abstract
The aim of the project is to develop the design of a prototype capable of producing a specific type of yarn: wrap spinning. This method consists, as its name suggests, in wrapping continuous filaments around a ribbon of parallel fibres. First of all, in order to go in depth into the textile area, there have been studied the principle characteristics of the fibres that compose the yarns. Moreover, it has been described the process followed by the fibres that constitute the yarn. Hereafter, there have been exposed the most common methods used at the present time for producing yarn and specifically the one that will characterize the prototype design: wrap yarn technology. The study of different machines capable of making wrap yarn has been done for the purpose of analysing the principles in which they are based and later on presenting a range of prototypes designs. The different alternatives will be compared and contrasted to identify the positive aspects of each proposal. Several books and Internet pages have been used in order to be highly documented within the framework of yarn technology. Furthermore, visits to Schappe Techniques and Bergère de France SA were greatly beneficial to the project development.
SubjectsYarn -- Manufacturing processes, Spinning, Fils -- Fabricació, Filatura
URIhttp://hdl.handle.net/2117/78009
Collections
Share: