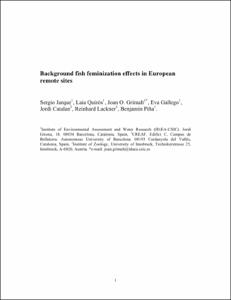 Human activity has spread trace amounts of chemically stable endocrine-disrupting pollutants throughout the biosphere. These compounds have generated a background level of estrogenic activity that needs to be assessed. Fish are adequate sentinels for feminization effects as male specimens are more sensitive than humans to exogenous estrogenic compounds. High mountain lakes, the most distant environments of continental areas, only receive semi-volatile compounds from atmospheric deposition. We analyzed the expression levels of estrogen-regulated genes in male fish from these mountain lakes in Europe. Incipient feminization involving expression of estrogen receptor and zona radiata genes revealed a widespread diffuse estrogenic impact. This effect was correlated with the concentrations of some organochlorine compounds in fish and was consistent with the persistent occurrence of these tropospheric pollutants in the most remote planet regions. These results should be of general concern given the increasing endocrine disruption effects in human populations
CitationJarque, S., Quirós, L., Obrador, J., Gallego, E., Catalan, J., Lackner, R., Piña, B. Background fish feminization effects in European remote sites. "Scientific reports", 10 Maig 2015, vol. 5.
URIhttp://hdl.handle.net/2117/77945
DOI10.1038/srep11292
ISSN2045-2322
Publisher versionhttp://www.nature.com/articles/srep11292