Characterization of ammonium and phosphate adsorption by synthetic zeolite 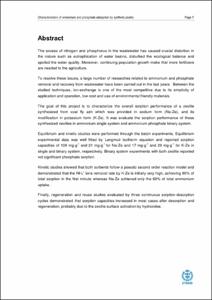 Document typeMaster thesis (pre-Bologna period)
Rights accessOpen Access
All rights reserved. This work is protected by the corresponding intellectual and industrial property rights. Without prejudice to any existing legal exemptions, reproduction, distribution, public communication or transformation of this work are prohibited without permission of the copyright holder
Abstract
The excess of nitrogen and phosphorus in the wastewater has caused crucial distortion in the nature such as eutrophication of water basins, disturbed the ecological balance and spoiled the water quality. Moreover, continuing population growth make that more fertilizers are needed to the agriculture. To resolve these issues, a large number of researches related to ammonium and phosphate removal and recovery from wastewater have been carried out in the last years. Between the studied techniques, ion-exchange is one of the most competitive due to its simplicity of application and operation, low cost and use of environmental friendly materials. The goal of this project is to characterize the overall sorption performance of a zeolite synthesized from coal fly ash which was provided in sodium form (Na-Ze), and its modification in potassium form (K-Ze). It was evaluate the sorption performance of these synthesized zeolites in ammonium single system and ammonium-phosphate binary system. Equilibrium and kinetic studies were performed through the batch experiments. Equilibrium experimental data was well fitted by Langmuir isotherm equation and reported sorption capacities of 109 mg·g-1 and 21 mg·g-1 for Na-Ze and 17 mg·g-1 and 29 mg·g-1 for K-Ze in single and binary system, respectively. Binary system experiments with both zeolite reported not significant phosphate sorption. Kinetic studies showed that both sorbents follow a pseudo second order reaction model and demonstrated that the NH4+ ions removal rate by K-Ze is initially very high, achieving 90% of total sorption in the first minute whereas Na-Ze achieved only the 60% of total ammonium uptake. Finally, regeneration and reuse studies evaluated by three continuous sorption-desorption cycles demonstrated that sorption capacities increased in most cases after desorption and regeneration, probably duo to the zeolite surface activation by hydroxides.
SubjectsSewage -- Purification -- Ion exchange process, Zeolites, Sewage -- Purification -- Ammonium removal, Sewage -- Purification -- Phosphates removal, Phosphates -- Absorption and adsorption, Ammonium -- Absorption and adsorption, Fly ash, Aigües residuals -- Depuració -- Bescanvi iònic, Procés de, Zeolites, Aigües residuals -- Depuració -- Eliminació d'amoni, Aigües residuals -- Depuració -- Eliminació de fosfats, Fosfats -- Absorció i adsorció, Amoni -- Absorció i adsorció, Cendres volants
DegreeENGINYERIA INDUSTRIAL (Pla 1994)
URIhttp://hdl.handle.net/2117/77918
Collections
Share: