Design of a mooring system for a Wave Energy Converter 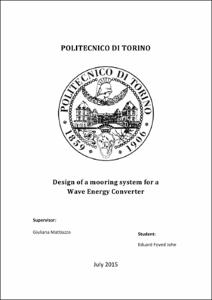 Show full item record
Foved Johe, Eduard
Tutor / directorMattiazzo, Giuliana
Document typeBachelor thesis
Rights accessOpen Access
Abstract
In the current scenario of exhaustion of fossil fuels, new forms of alternative energy must gain ground. Taking advantage of the great amount of water, the element that gives name to our planet (blue planet); this thesis is focused on one of the ways to extract energy from water: using the waves motion in order to generate electricity. The aim of this thesis is to collaborate in a project of a Wave Energy Converter developed by a group of researchers of Politecnico di Torino. Specifically, much of the study will focus on the design a mooring system for the Wave Energy Converter and integrate it to the linear model of the system. First of all, in the first chapter an overview of the energy consumption problem is given. It is also commented the need of using renewable sources and some of them are presented. In chapter two, it is presented the wave power as a possible clean energy source. It is also explained with numerical values the great viability of this source both globally and in Europe. Finally, some sea characteristics of the region where the Wave Energy Converter will be placed (Mediterranean Sea, Pantelleria) are also commented. Then in chapter three, the concept of a Wave Energy Converter is described. Two different ways to classify these devices are given and some existent Wave Energy Converters projects are presented. In chapter four it is presented the Wave Energy Converter studied in this thesis: the PEWEC (PEndulum Wave Energy Converter). Its working principle it is briefly remarked and some aspects of the mechanism that makes the energy conversion (the pendulum) are commented. Chapter five is focused on one of the main goals of this thesis: the mooring system. Firstly, a presentation of the objectives, requirements, different configurations and components of a mooring system is given. Then, the PEWEC’s mooring system is described: its design, the integration of the mooring system into the PEWEC’s linear model and the obtaining of the mooring stiffness and parameters. In chapter six, the 1:45 PEWEC prototype is fully described. Its components are named and are explained. This work is done by comparing the SolidWorks drawings with real images of the prototype. Chapter seven is focused on the description of the PEWEC’s linear model. It will be commented its parameters and the linear model will be launched. The results of the simulation will be presented and analyzed. In order to facilitate the analysis, a graphic data analysis will be developed. Then in chapter eight, the tests carried out in Rome with the 1:45 prototype are explained. The testing facilities and the different tests developed are described and the data collected is analyzed. In chapter nine, it will be possible to develop a first comparison between the linear model simulation and the testing results. Finally, the last part consists in a conclusion of all the work developed in this thesis. It will be possible to extract some conclusions about the comparison between the linear model and the testing results. At the end of this document it is possible to find an annex with extra information of the work developed, such as parts of Matlab code. It is important to comment that this thesis is focused in the 1:45 prototype. However, in parallel it has been developing the 1:12 prototype. The 1:12 prototype is expected to be tested during July 2015. All the study developed in the mooring system for the 1:45 prototype can also be useful for the 1:12 prototype, with a necessary adaptation of the parameters.
SubjectsEnergy conversion, Tidal power, Ocean wave power, Energia -- Conversió, Energia maremotriu, Energia de les onades
ProvenanceAquest document conté originàriament altre material i/o programari no inclòs en aquest lloc web
DegreeGRAU EN ENGINYERIA EN TECNOLOGIES INDUSTRIALS (Pla 2010)
Location
1: 91017 Pantel·leria, Província de Trapani, Itàlia
URIhttp://hdl.handle.net/2117/77914
Collections
Share: