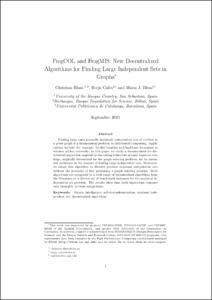 Document typeArticle
Rights accessOpen Access
Abstract
Finding large (and generally maximal) independent sets of vertices in a given graph is a fundamental problem in distributed computing. Applications include, for example, facility location and backbone formation in wireless ad hoc networks. In this paper, we study a decentralized (or distributed) algorithm inspired by the calling behavior of male Japanese tree frogs, originally introduced for the graph-coloring problem, for its potential usefulness in the context of finding large independent sets. Moreover, we adapt this algorithm to directly produce maximal independent sets without the necessity of first producing a graph-coloring solution. Both algorithms are compared to a wide range of decentralized algorithms from the literature on a diverse set of benchmark instances for the maximal independent set problem. The results show that both algorithms compare very favorably to their competitors.
CitationBlum, C., Calvo, B., Blesa, M. FrogCOL and FrogMIS: new decentralized algorithms for finding large independent sets in graphs. "Swarm intelligence", 01 Setembre 2015, vol. 9, núm. 2-3, p. 205-227.
URIhttp://hdl.handle.net/2117/77894
DOI10.1007/s11721-015-0110-1
ISSN1935-3812
Publisher versionhttp://link.springer.com/article/10.1007/s11721-015-0110-1
Collections
Share: