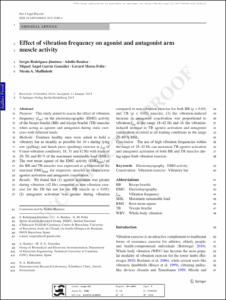 Moras-Feliu, Gerard
Maffiuletti, Nicola A.
Document typeArticle
Rights accessOpen Access
Abstract
Purpose This study aimed to assess the effect of vibration frequency (fout) on the electromyographic (EMG) activity of the biceps brachii (BB) and triceps brachii (TB) muscles when acting as agonist and antagonist during static exercises with different loads. Methods Fourteen healthy men were asked to hold a vibratory bar as steadily as possible for 10 s during lying row (pulling) and bench press (pushing) exercise at fout of 0 (non-vibration condition), 18, 31 and 42 Hz with loads of 20, 50, and 80 % of the maximum sustainable load (MSL). The root mean square of the EMG activity (EMGRMS) of the BB and TB muscles was expressed as a function of the maximal EMGRMS for respective muscles to characterize agonist activation and antagonist coactivation. Results We found that (1) agonist activation was greater during vibration (42 Hz) compared to non-vibration exercise for the TB but not for the BB muscle (p < 0.05); (2) antagonist activation was greater during vibration compared to non-vibration exercise for both BB (p < 0.01) and TB (p < 0.05) muscles; (3) the vibration-induced increase in antagonist coactivation was proportional to vibration fout in the range 18–42 Hz and (4) the vibrationinduced increase in TB agonist activation and antagonist coactivation occurred at all loading conditions in the range 20–80 % MSL. Conclusion The use of high vibration frequencies within the range of 18–42 Hz can maximize TB agonist activation and antagonist activation of both BB and TB muscles during upper limb vibration exercise.
CitationRodríguez, S., Benítez, A., Garcia, M., Moras-Feliu, G., Maffiuletti, N. Effect of vibration frequency on agonist and antagonist arm muscle activity. "European journal of applied physiology", 23 Gener 2015, vol. 115, núm. 6, p. 1305-1312.
URIhttp://hdl.handle.net/2117/77889
DOI10.1007/s00421-015-3108-x
ISSN1439-6319
Publisher versionhttp://link.springer.com/article/10.1007%2Fs00421-015-3108-x
Collections
Share: