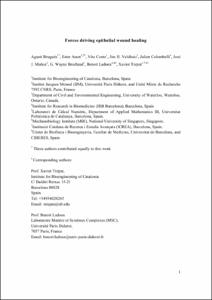 A fundamental feature of multicellular organisms is their ability to self-repair wounds through the movement of epithelial cells into the damaged area. This collective cellular movement is commonly attributed to a combination of cell crawling and 'purse-string' contraction of a supracellular actomyosin ring. Here we show by direct experimental measurement that these two mechanisms are insufficient to explain force patterns observed during wound closure. At early stages of the process, leading actin protrusions generate traction forces that point away from the wound, showing that wound closure is initially driven by cell crawling. At later stages, we observed unanticipated patterns of traction forces pointing towards the wound. Such patterns have strong force components that are both radial and tangential to the wound. We show that these force components arise from tensions transmitted by a heterogeneous actomyosin ring to the underlying substrate through focal adhesions. The structural and mechanical organization reported here provides cells with a mechanism to close the wound by cooperatively compressing the underlying substrate.
CitationMuñoz, J.J., Gupta, M., Ladux, B., Trepat, X. Forces driving epithelial wound healing. "Nature physics", 01 Setembre 2014, vol. 10, núm. 9, p. 683-690.
URIhttp://hdl.handle.net/2117/77874
DOI10.1038/NPHYS3040
ISSN1745-2473
Publisher versionhttp://www.nature.com/nphys/journal/v10/n9/full/nphys3040.html#author-information