Improving the BeagleBone board with embedded Ubuntu, enhanced GPMC driver and Python for communication and graphical prototypes 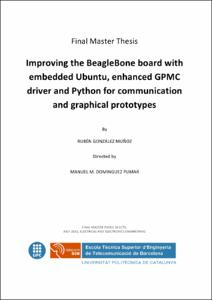 Document typeMaster thesis
Rights accessOpen Access
Abstract
BeagleBone is a low price, small size Linux embedded microcomputer with a full set of I/O pins and processing power for real-time applications, also expandable with cape pluggable boards. The current work has been focused on improving the performance of this board. In this case, the BeagleBone comes with a pre-installed Angstrom OS and with a cape board using a particular software “overlay” and applications. Due to a lack of support, this pre-installed OS has been replaced by Ubuntu. As a consequence, the cape software and applications need to be adapted. Another necessity that emerges from the stated changes is to improve the communications through a GPMC interface. The depicted driver has been built for the new system as well as synchronous variants, also developed and tested. Finally, a set of applications in Python using the cape functionalities have been developed. Some extra graphical features have been included as example.
SubjectsEmbedded computer systems, Sistemes incrustats (Informàtica)
URIhttp://hdl.handle.net/2117/77866
Collections
Share: