Treedecomposition of geometric constraint graphs based on computing graph circuits 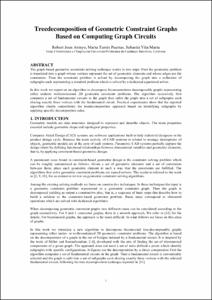 Document typeConference report
PublisherACM Press, NY
Rights accessOpen Access
Abstract
The graph-based geometric constraint solving technique works in two steps. First the geometric problem is translated into a graph whose vertices represent the set of geometric elements and whose edges are the constraints. Then the constraint problem is solved by decomposing the graph into a collection of subgraphs each representing a standard problem which is solved by a dedicated equational solver. In this work we report on an algorithm to decompose biconnected tree-decomposable graphs representing either underor wellconstrained 2D geometric constraint problems. The algorithm recursively first computes a set of fundamental circuits in the graph then splits the graph into a set of subgraphs each sharing exactly three vertices with the fundamental circuit. Practical experiments show that the reported algorithm clearly outperforms the treedecomposition approach based on identifying subgraphs by applying specific decomposition rules.
CitationTarres, M.; Vila, S.; Joan-Arinyo, R. Treedecomposition of geometric constraint graphs based on computing graph circuits. A: SIAM/ACM Joint Conference on Geometric and Physical Modeling. "2009 SIAM/ACM Joint Conference on Geometric and Physical Modeling". New York: ACM, 2009, p. 113-122.
URIhttp://hdl.handle.net/2117/7779
DOI10.1145/1629255.1629270
ISBN978-1-60558-711-0
Collections
Share: