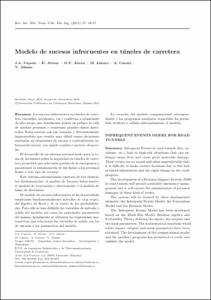 Show full item record
Manzoli, Osvaldo L.
Rodrigues, Eduardo A.
Gamino, Andre L.
Document typeArticle
PublisherUniversitat Politècnica de Catalunya. CIMNE
Rights accessOpen Access
Abstract
A combined constitutive model based on the Continuum Damage Mechanics is presented to represent the nonlinear behavior of quasi-brittle materials, which present different response when subjected to tension or compression. The constitutive model is a composition of two simple and specific models designed to treat each type of behavior. The combined model is able to deal with alternating load (tensioncompression), involving formation, closure and reopening of cracks. To model the compressive behavior, a degradation criterion based on the second invariant of the deviatoric part of the effective stress tensor (Von Mises or J2 criterion) is used. To simulate cracking, a damage model with degradation criterion based on the strain energy associated to the positive part the effective stress tensor is adopted. The combination of the models is made on the basis of the effective stresses. The model is able to represent the formation of discontinuities in the displacement field (strong discontinuities) for quasi-brittle materials. The region of strain localization (fracture process zone) is described by a softening law which establishes dissipation energy compatible with the fracture energy. The continuous region is described by the J2 damage model, with parameters adjusted to describe the compressive nonlinear behavior in compression. Some basic tests are performed to assess the ability of the model to represent the main aspects of the behavior of quasi-brittle materials. The ability of the model to predict the ductile behavior of reinforced concrete beams is also studied by comparing the numerical results with experimental ones.
CitationManzoli, Osvaldo L.; Rodrigues, Eduardo A.; Gamino, Andre L. Simulação do comportamento não linear de materiais quase-frágeis via elementos finitos com fissura embebida. "Revista internacional de métodos numéricos para cálculo y diseño en ingeniería", 2011, vol. 27, núm. 2, p. 117-128.
URIhttp://hdl.handle.net/2117/77769
Collections
Share: