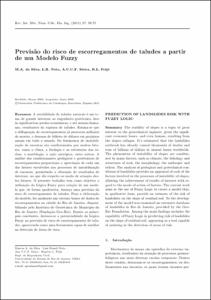 Show full item record
Silva, Marcos A. da
Neto, Luiz Biondi
Sieira, Ana C.C.F.
Feijó, Rogério L.
Document typeArticle
PublisherUniversitat Politècnica de Catalunya. CIMNE
Rights accessOpen Access
Abstract
The stability of slopes is a topic of great interest to the geotechnical engineer, given the significant economic losses, and even human, resulting from the slopes collapse . It's estimated that the landslides outbreak has already caused thousands of deaths and tens of billions of dollars in annual losses worldwide. The phenomena of instability of slopes are conditioned by many factors, such as climate, the lithology and structures of rock, the morphology, the anthropic and others. The anlaysis of geological and geotechnical conditions of landslides provides and appraisal of each of the factors involved in the processes of instability of slopes, allowing the achievement of results of interest with regard to the mode of acton of fators. The current work aims at the use of Fuzzy Logic to create a model that, in qualitative form, provide an estimate of the risk of landslides on the slope of residual soil. To the development of the model was examined and extensive database of landslides in Rio de Janeiro, provided by the GeoRio Foundation. Among the main findings includes the capability of fuzzy logic predicting risk of landslides on the slope of residual soil, appearing as a tool capable of assisting in the detection of areas of risk.
CitationSilva, Marcos A. da [et al.]. Previsão do risco de escorregamentos de taludes a partir de um modelo fuzzy. "Revista internacional de métodos numéricos para cálculo y diseño en ingeniería", 2011, vol. 27, núm. 1, p. 59-75.
URIhttp://hdl.handle.net/2117/77729
ISSN1886-158X
Collections
Share: