Modelization of a hybrid system with renewable energy for electric propulsion in boats. Application to a robotic floating platform 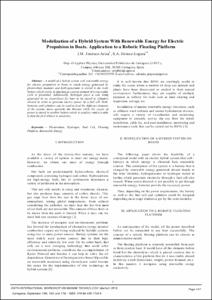 A model of a hybrid system with renewable energy for electric propulsion in boats in which energy generated by photovoltaic panels and hydrogenerator is stored in the main battery which exerts its function as central element of a renewable cycle is presented. Additionally, hydrogen plays a role being generated by an electrolyzer for later to be stored in cylinders aboard in order to generate electric power by a fuel cell. Both, batteries and cylinders can be used to feed the different elements of the system, more specially the thruster while the excess of power is stored in another battery which is auxiliary and it is able to feed the first when it is necessary.
URIhttp://hdl.handle.net/2117/77712
ISSN1886-4864