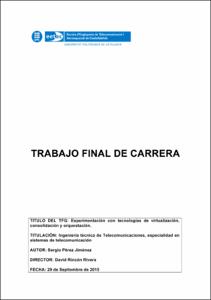 Except where otherwise noted, content on this work is licensed under a Creative Commons license : Attribution-NonCommercial-ShareAlike 3.0 Spain
Abstract
The network virtualization for the IT infrastructures didn't happen until 10 years after the servers virtualization. This new concept for the network deployment has allowed the re-design of typical infrastructures towards an innovative model that offers increased availability for environments and applications. The use of such practices is known as cloud computing. During this project, we intended to analyse the current state of these technologies and their functionalities through various labs. We then deployed a technical implementation in a real environment. Two virtualization technology labs have been setup to achieve this objective. The first one to experiment with network virtualization technologies and the second one to test the orchestration of virtualized systems. During the development of this project a procedure to consolidate the physical communication resources has been also started. This consolidation has two main objectives: prepare the platform to install the technologies related to the networking virtualization while, at the same time, reduce the expenses for hardware support and electricity. An offer with a budget able to stand the orchestration system has been also prepared. Before upgrading the platform and in order to get familiarized withe the chosen solution, OpenNebula Orchestration system, a pre-production lab environment was prepared. During the development of this project we have experimented with new virtualization technologies, we have managed to consolidate real resources achieving great results and we've managed to take a first step towards functional systems orchestration, in order to get the needed knowledge to provide cloud services.
SubjectsSoftware-defined networking (Computer network technology)
DegreeENGINYERIA TÈCNICA DE TELECOMUNICACIÓ, ESPECIALITAT EN SISTEMES DE TELECOMUNICACIÓ (Pla 2000)
URIhttp://hdl.handle.net/2117/77674
Collections
Share: