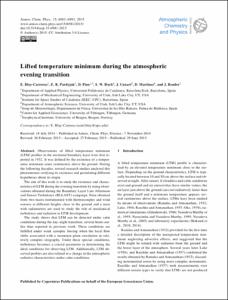 Except where otherwise noted, content on this work is licensed under a Creative Commons license : Attribution-NonCommercial-NoDerivs 3.0 Spain
Abstract
Observations of lifted temperature minimum (LTM) profiles in the nocturnal boundary layer were first reported in 1932. It was defined by the existence of a temperature minimum some centimetres above the ground. During the following decades, several research studies analysed this phenomenon verifying its existence and postulating different hypotheses about its origin. The aim of this work is to study the existence and characteristics of LTM during the evening transition by using observations obtained during the Boundary Layer Late Afternoon and Sunset Turbulence (BLLAST) campaign. Data obtained from two masts instrumented with thermocouples and wind sensors at different heights close to the ground and a mast with radiometers are used to study the role of mechanical turbulence and radiation in LTM development. The study shows that LTM can be detected under calm conditions during the day–night transition, several hours earlier than reported in previous work. These conditions are fulfilled under weak synoptic forcing when the local flow shifts associated with a mountain–plain circulation in relatively complex orography. Under these special conditions, turbulence becomes a crucial parameter in determining the ideal conditions for observing LTM. Additionally, LTM observed profiles are also related to a change in the atmospheric radiative characteristics under calm conditions.
CitationBlay-Carreras, E., Pardyjak, E., Pino, D., Hoch, S., Cuxart, J., Martínez, D., Reuder, J. Lifted temperature minimum during the atmospheric evening transition. "Atmospheric chemistry and physics", 29 Juny 2015, vol. 15, p. 6981-6991.
URIhttp://hdl.handle.net/2117/77669
ISSN1680-7316
Publisher versionhttp://www.atmos-chem-phys.net/15/6981/2015/acp-15-6981-2015.html
Collections
Share: