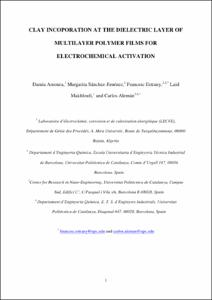 Document typeArticle
Rights accessOpen Access
Abstract
The electrochemical properties (i.e. electroactivity, electrostability and specific capacitance) of 3-layered films made of poly(3,4-ethylenedioxythiophene) (PEDOT) and poly(N-methylpyrrole) (PNMPy) arranged alternatively have been activated by incorporating exfoliated montmorillonite (MMT) at the intermediate layer. 3-Layered films were prepared using the layer-by-layer electropolymerization technique, whereas the previously exfoliated clay was incorporated into PNMPy layer using an in situ polymerization procedure. The influence of the clay on the properties has been investigated as function of the thickness of the internal and external PEDOT layers, which has been controlled through the polymerization time. Micrometric PEDOT layers have been found to exert a template effect on the topography and morphology of the intermediate PNMPy or PNMPy-MMT layer, this effect being practically inexistent for films with nanometric PEDOT layers. The ability to exchange charge reversibly (electroactivity) and the electrochemical stability (electrostability) of films with MMT at the intermediate layer are higher than those of films without clay, these effects being more pronounced for films with micrometric PEDOT layers. The influence of the thickness is even more remarkable in the specific capacitance, which decreases rapidly with increasing thickness. The clay at the intermediate layer improves the specific capacitance of micrometric films and, most importantly, protects the capacitive behavior against electrochemical degradation in all cases. In summary, the presence of MMT in the intermediate PNMPy layer makes 3-layered films sensitive to the dielectric breakage, activating their electrochemical and capacitive properties. Such clay-induced effects are more pronounced for films made of micrometric PEDOT layers. (C) 2015 Elsevier Ltd. All rights reserved.
CitationAmoura, D., Sanchez, M., Estrany, F., Makhloufi, L., Aleman, C. Clay incorporation at the dielectric layer of multilayer polymer films for electrochemical activation. "European polymer journal", 01 Agost 2015, vol. 69, p. 296-307.
URIhttp://hdl.handle.net/2117/77664
DOI10.1016/j.eurpolymj.2015.05.030
ISSN0014-3057
Collections
Share: