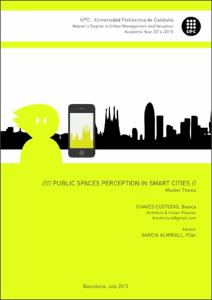 Document typeMaster thesis
Rights accessOpen Access
Abstract
Nowadays the possibility of being ubiquitous connected generates new patterns in the relation between people and the built environment. This research seeks to investigate how the widespread use of smartphones frames people’s perception, behaviour and interaction with public spaces and create new forms of urban dynamics in the Smart Cities era. In this context, we compared the different social groups (tourists, temporary and permanent residents) that inhabit the city. Adopting traditional methods of field observation and combining them with surveys and interviews we have extended and improved existing methodologies, generating a singular comprehensive dataset, consisting of more than 5000 observations. The analysis of all collected data provided insightful outcomes both at street level and from the users’ point of view. The results evince that behavioural patterns on the use of technology in public spaces are tightly linked to the social group each person belongs to and to the relation each one has to a place. Despite the infinite possibilities of being online, mediated perception do not replace the intangible value of face-to-face relations.
SubjectsSociology, Urban -- Spain -- Barcelona, Electronic villages (Computer networks), Public spaces -- Spain -- Barcelona, Sociologia urbana -- Catalunya -- Barcelona, Ciutats digitals (Xarxes d'ordinadors), Espais públics -- Catalunya -- Barcelona
Location
1: Sant Pere - Santa Caterina i la Ribera, Barcelona, Espanya
URIhttp://hdl.handle.net/2117/77642
Collections
Share: