Transdisciplinary and multiscale reconstruction of the major floods 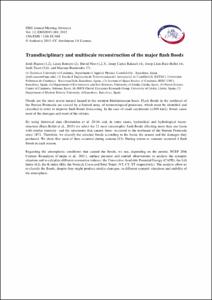 Balasch Solanes, Josep Carles
Ruiz Bellet, Josep Lluís
Tuset Mestre, Jordi
Barriendos Valve, Mariano
Document typeConference report
Rights accessOpen Access
Abstract
Floods are the most severe natural hazard in the western Mediterranean basin. Flash floods in the northeast of the Iberian Peninsula are caused by a limited array of meteorological processes, which must be identified and classified in order to improve flash floods forecasting. In the case of small catchments (<500 km2), floods cause most of the damages and most of the victims. By using historical data (Barriendos et al. 2014) and, in some cases, hydraulical and hydrological reconstruction (Ruiz-Bellet et al., 2015) we select the 21 most catastrophic flash floods affecting more than one basin with similar intensity -and the rainstorms that caused them- occurred in the northeast of the Iberian Peninsula since 1871. Therefore, we classify the selected floods according to the basin, the season and the damages they produced. We show that most of then occurred during autumn (13). During winter or summer occurred 4 flash floods in each season. Regarding the atmospheric conditions that caused the floods, we use, depending on the period, NCEP 20th Century Reanalysis (Compo et al., 2011), surface pressure and rainfall observations to analyze the synoptic situation and to calculate different convective indexes: the Convective Available Potential Energy (CAPE), the Lift Index (LI), the K index (KI), the Vertical, Cross and Total Totals (VT, CT, TT respectively). The analysis allow us to classify the floods, despite they might produce similar damages, in different synoptic situations and stability of the atmosphere
CitationMazon, J., Romero, L., Pino, D., Balasch, J., Ruiz, J., Tuset, J., Barriendos, M. Transdisciplinary and multiscale reconstruction of the major floods. A: Annual Meeting European Meteorological Society organised with European Conference on Aplications of Meteorology. "15th EMS Annual Meeting & 12th European Conference on Applications of Meteorology (ECAM) : 07–11 September 2015 : Sofia, Bulgaria : abstracts". Sofia: 2015.
URIhttp://hdl.handle.net/2117/77590
Collections
Share: