A proposal for a workable analysis of Energy Return on Investment (EROI) in agroecosystems. Part I: Analytical approach 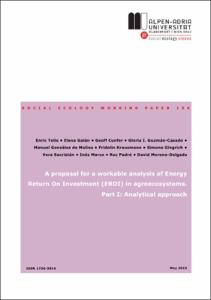 Except where otherwise noted, content on this work is licensed under a Creative Commons license : Attribution-NonCommercial-NoDerivs 3.0 Spain
Abstract
This paper presents a workable approach to the energy analysis of past and present agroecosystems aimed to contribute to their sustainability assessment. This analysis sees the agroecosystem as a set of energy loops between nature and society, and adopts a farm-operator standpoint at landscape level that involves setting specific system boundaries. This in turn entails a specific form to account for energy outputs as well as inputs. According to this conceptual approach, a clear distinction between Unharvested Phytomass, Land Produce and Final Produce is established, and also a sharp divide is adopted between the energy content of internal flows of Biomass Reused and external Societal Inputs when accounting for the amount of Total Inputs Consumed . Treating the conversion of solar radiation into local biomass as a gift of nature, enthalpy values of energy carriers are accounted for net Final Produce going outside as well as for Biomass Reused or Unharvested Phytomass , given that all these flows are evaluated from inside the agroecosystem. On the other hand, the external energy carriers are accounted for as embodied values by adding up direct and indirect energy carriers required to produce or deliver these Societal Inputs to the agroecosystem. The human Labour performed by the farm operators is treated as a special case of external input. It is accounted for the fraction of their energy intake devoted to perform agricultural work, by only using enthalpy or adding transport embodied values depending on the local or external origin of ingredients of the food basket. Following this line of reasoning we propose the definition of two different sets of agroecosystem’s Energy Returns On Energy Inputs (EROIs), depending on whether we use as numerator the Final Produce or the total phytomass harvested and unharvested included in the actual Net Primary Production. By comparing Final EROI with NPP act EROI we can obtain a proxy useful to assess whether the different paths taken by the energy throughputs may undermine or not biodiversity and soil fertility in agroecosystems. Then, by alternatively including or excluding Biomass Reused and External Inputs in the denominator, we split Final EROI into their respective energy returns to either internal or external inputs. This leads to a four interrelated EROIs whose meanings, shortcomings or ambiguities are examined respectively, in order to combine them all to draw the sociometabolic energy profiles of different sorts of agroecosystems along the socio-ecological transitions from traditional organic to industrial farm systems. The conceptual and quantitative relationships between the internal and external returns of Final EROI provide a method to decompose both dimensions in a way that clarifies their respective roles when comparing different agroecosystems, and reveals their capacity for increasing energy yields. This decomposition analysis also facilitates graphing their changing energy profiles through socio-ecological transitions along history. Finally, we suggest other related or derived indicators that can be useful for different purposes. With the bookkeeping proposed the energy analysis of farm systems is widened so as to highlight the role played by the biomass unharvested or internally reused in keeping the ecological services that biodiversity and soil fertility provide. This may also allow to test in agro-forest mosaics the Intermediate Disturbance Hypothesis long debated in ecology, by linking our energy analysis with landscape ecology metrics.
CitationTello, E., Galán, E., Cunfer, G., Guzmán, G., González de Molina, M., Krausmann, F., Gingrich, S., Sacristán, V., Marco, I., Padró, R., Moreno-Delgado, D. A proposal for a workable analysis of Energy Return on Investment (EROI) in agroecosystems. Part I: Analytical approach. "IFF Social Ecology Working Papers", 2015, vol. 156, p. 1-110.
URIhttp://hdl.handle.net/2117/77586
ISSN1726-3816
Publisher versionhttp://www.uni-klu.ac.at/socec/eng/
Collections
Share: