Frontogenesis at the whole mesoscale in the West Mediterranean basin: from raincells to rainbands 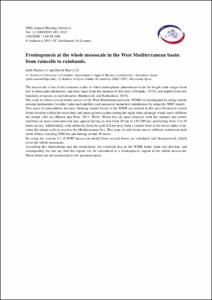 Except where otherwise noted, content on this work is licensed under a Creative Commons license : Attribution-NonCommercial-NoDerivs 3.0 Spain
Abstract
The mesoscale is one of the common scales in which atmospheric phenomena occur. Its length scale ranges from few to thousands kilometers, and time lapse from few minutes to few days (Orlanski, 1975), and depths from few hundreds of meters to one kilometer (Markowski and Richardson, 2010). The scale in which coastal fronts occurs in the West Mediterranean basin (WMB) is investigated by using remote sensing instruments (weather radar and satellite) and mesoscale numerical simulations by using the WRF model. Two types of atmospheric dynamic forming coastal fronts in the WMB are noticed in this area Nocturnal coastal fronts develop within the meso-beta and meso-gamma scales during the night when drainage winds move offshore the inland cold air (Mazon and Pino, 2013, 2014). When this air mass interacts with the warmer and wetter maritime air mass cloud and rain may appear having an area from 20 km to 150-200 km, and lasting from 3 to 10 hours occurs. Additionally, cold outbreaks from the gulf of Lion may form a coastal front in the meso-alpha scale, when the inland cold air reaches the Mediterranean Sea. This type of cold fronts moves offshore southward until north Africa, reaching 2000 km and lasting around 30 hours. By using the version 3.3 of WRF mesoscale model three coastal fronts are simulated and characterized, which cover the whole mesoscale. According the observations and the simulations, we conclude that in the WMB fronts form and develop, and consequently we can say that this region can be considered as a frontogenesis region at the whole mesoscale. These fronts are not associated to low pressures areas
CitationMazon, J., Pino, D. Frontogenesis at the whole mesoscale in the West Mediterranean basin: from raincells to rainbands. A: Annual Meeting European Meteorological Society organised with European Conference on Aplications of Meteorology. "15th EMS Annual Meeting & 12th European Conference on Applications of Meteorology (ECAM) : 07–11 September 2015 : Sofia, Bulgaria : abstracts". Sofia: 2015.
URIhttp://hdl.handle.net/2117/77583
Collections
Share: