Turbulence vertical structure of the boundary layer during the afternoon transition 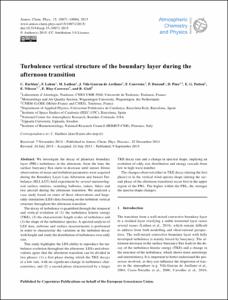 Patton, Edward
Nilsson, Erik
Blay-Carreras, Estel
Gioli, Beniamino
Document typeArticle
Rights accessOpen Access
Abstract
We investigate the decay of planetary boundary layer (PBL) turbulence in the afternoon, from the time the surface buoyancy flux starts to decrease until sunset. Dense observations of mean and turbulent parameters were acquired during the Boundary Layer Late Afternoon and Sunset Tur- bulence (BLLAST) field experiment by several meteorolog- ical surface stations, sounding balloons, radars, lidars and two aircraft during the afternoon transition. We analysed a case study based on some of these observations and large- eddy simulation (LES) data focusing on the turbulent vertical structure throughout the afternoon transition. The decay of turbulence is quantified through the temporal and vertical evolution of (1) the turbulence kinetic energy (TKE), (2) the characteristic length scales of turbulence and (3) the shape of the turbulence spectra. A spectral analysis of LES data, airborne and surface measurements is performed in order to characterize the variation in the turbulent decay with height and study the distribution of turbulence over eddy size. This study highlights the LES ability to reproduce the tur- bulence evolution throughout the afternoon. LESs and obser- vations agree that the afternoon transition can be divided in two phases: (1) a first phase during which the TKE decays at a low rate, with no significant change in turbulence char- acteristics, and (2) a second phase characterized by a larger TKE decay rate and a change in spectral shape, implying an evolution of eddy size distribution and energy cascade from low to high wave number. The changes observed either in TKE decay (during the first phase) or in the vertical wind spectra shape (during the sec- ond phase of the afternoon transition) occur first in the upper region of the PBL. The higher within the PBL, the stronger the spectra shape changes
CitationDarbieu, C., Lohou, F., Lothon, M., Vilà, J., Couvreux, F., Durand, P., Pino, D., Patton, E., Nilsson, E., Blay-Carreras, E., Gioli, B. Turbulence vertical structure of the boundary layer during the afternoon transition. "Atmospheric chemistry and physics", 09 Setembre 2015, vol. 15, p. 10071-10086.
URIhttp://hdl.handle.net/2117/77577
DOI10.5194/acp-15-10071-2015
ISSN1680-7316
Publisher versionhttp://www.atmos-chem-phys.net/15/10071/2015/acp-15-10071-2015.pdf
Collections
Share: