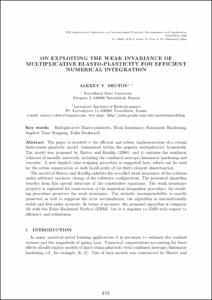 Show full item record
Shutov, Alexey V.
Document typeConference report
PublisherCIMNE
Rights accessOpen Access
Abstract
The paper is devoted to the efficient and robust implementation of a certain finite-strain plasticity model, formulated with in the popular multiplicative framework. The model was proposed by Shutov and Kreißig (2008), and it captures the nonlinear behavior of metallic materials, including the combine disotropic/kinematic hardening and viscosity. A new implicit time stepping procedure is suggested here, which can be used for the stress computation at each Gauß point of the finite element discretization. The model of Shutov and Kreißig exhibits the so-called weak invariance of the solution under arbitrary isochoric change of the reference configuration. The presented algorithm benefits from this special structure of the constitutive equations: The weak invariance property is exploited for construction of the numerical integration procedure; the resulting procedure preserves the weak invariance. The inelastic incompressibility is exactly preserved as well to suppress the error accumulation; the algorithm is unconditionally stable and first-orderaccurate. In terms of accuracy, the proposed algorithm is comparable with the Euler Backward Method (EBM), but it is superior to EMB with respect to efficiency and robustness.
CitationShutov, Alexey V. On exploiting the weak invariance of multiplicative elasto-plasticity for efficient numerical integration. A: COMPLAS XIII. "COMPLAS XIII : proceedings of the XIII International Conference on Computational Plasticity : fundamentals and applications". Barcelona: CIMNE, 2015, p. 272-283.
URIhttp://hdl.handle.net/2117/77567
ISBN978-84-944244-6-5
Collections
Share: