Atomistic modeling and simulation of long-term transport phenomena in nanomaterials 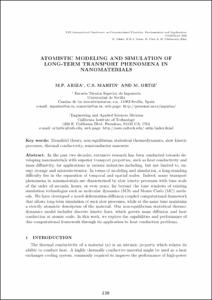 In the past two decades, extensive research has been conducted towards developing nanomaterials with superior transport properties, such as heat conductivity and mass diffusivity, for applications in various industries including, but not limited to,energy storage and microelectronics. In terms of modeling and simulation, along-standing difficulty lies in the separation of temporal and spatial scales. Indeed, many transport phenomena in nanomaterials are characterized by slow kinetic processes with time scale of the order of seconds, hours, or even years, far beyond the time windows of existing simulation technologies such as molecular dynamics (MD)and Monte Carlo (MC) methods. We have developed a novel deformation-diffusion coupled computational framework that allows long-term simulation of such slow processes, while at the same time maintains a strictly atomistic description of the material. Ournon-equilibrium statistical thermo-dynamics model includes discrete kinetic laws, which govern mass diffusion and head conductionion at atomic scale. In this work, we explore the capabilities and performance of this computational framework through its application to heat conduction problems.
CitationAriza, M.P.; Martin, C.S.; Ortiz, M. Atomistic modeling and simulation of long-term transport phenomena in nanomaterials. A: COMPLAS XIII. "COMPLAS XIII : proceedings of the XIII International Conference on Computational Plasticity : fundamentals and applications". Barcelona: CIMNE, 2015, p. 238-247.
URIhttp://hdl.handle.net/2117/77565
ISBN978-84-944244-6-5