Creating an open source platform to develop embedded control systems, and performing a control application on a real-time distributed system 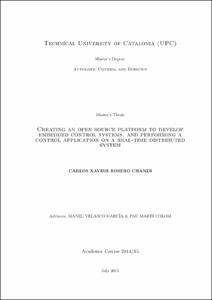 Document typeMaster thesis
Rights accessOpen Access
Abstract
In this project, it has been created a bootloader for the dsPIC33-based board named as Full FLEX, which works jointly with the Erika Enterprise RTOS. In addition, was designed a firmware to perform USB/UART bridging on a PIC18F microcontroller that is also placed inside this board. A python-based software, which decodes both ELF or HEX files into binary source and sends it via USB, from any computer towards the bootloader on the controller, has been created. Furthermore, at runtime the same communication channel can be used to establish a transparent bidirectional communication between the controller and any other software. With this implementation, at development stage, it has been removed an additional IDE and one programming-tool used in the past to program the controller. Furthermore, two additional devices utilized to establish communication between the board and any computer software at runtime stage, are also avoided. So it was possible to reduce both development time and cost spent on tools. It was decided to apply this tool for designing a control system of an inverted pendulum. This application is based on four nodes linked via a CAN. Each node has implemented the bootloader and also runs the above cited real-time operating system. Testing and analyzing results lead to conclude that the system is reliable, efficient and works in harmony beside the RTOS. In addition, the pendulum control system is stable and robust, plus it has achieved the desired control objectives. The development was carried out in the context of having a complete new platform that will be used to facilitate the creation of real-time and/or distributed control sys- tems that can be used both by researchers and students at the Real-Time Distributed Control Systems Laboratory in the Automation Department of the Technical University of Catalonia. The whole project and its documentation are available at github.com/xavierrosero/ FlexboardBootloader.
SubjectsDevice drivers (Computer programs), Real-time data processing, Control theory, Controladors, Temps real (Informàtica)
ProvenanceAquest document conté originàriament altre material i/o programari no inclòs en aquest lloc web
URIhttp://hdl.handle.net/2117/77556
Collections
Share: