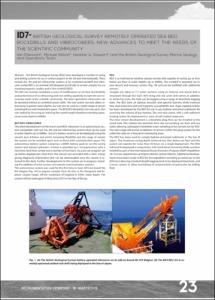 The British Geological Survey (BGS) have developed a number of coring and drilling systems for use in science projects in the UK and internationally. These include 3m, 4m and 6m vibrocoring systems; a 5m combined rockdrill and vibrocorer system(RD1); an oriented drill designed specifically to recover samples for use in palaeomagnetic studies; and a 55m rockdrill (RD2). The BGS has recently completed a series of modifications to increase the flexibility and performance of its vibrocoring and rock-drilling capability to meet the ever increasing needs of the scientific community. The latest generation vibrocorers can be operated without an umbilical power cable. The new system not only allows vibrocoring in greater water depths, but can also be used on a wider range of vessels including those with limited deck space. The BGS RD2 (Rockdril2) can core up to 55m sub-seabed by focussing on reducing the overall weight therefore extending operational water depth to 4000m.
URIhttp://hdl.handle.net/2117/77425
ISSN1886-4864