Elastoplastic modelling of a ventilation test in argillaceous rock 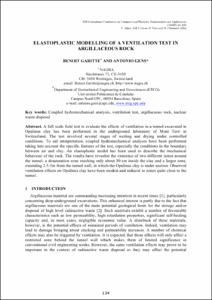 Document typeConference report
PublisherCIMNE
Rights accessOpen Access
Abstract
A full scale field test to evaluate the effects of ventilation in a tunnel excavated in Opalinus clay has been performed in the underground laboratory of Mont Terri in Switzerland. The test involved several stages of wetting and drying under controlled conditions. To aid interpretation, coupled hydromechanical analyses have been performed taking into account the specific features of the test, especially the conditions in the boundary between air and clay. An elastoplastic model has been used to describe the mechanical behaviour of the rock. The results have revealed the existence of two different zones around the tunnel: a desaturation zone reaching only about 50 cm inside the clay and a larger zone, extending 2.5-3m from the tunnel wall, in which the Opalinus clay is under suction. Observed ventilation effects on Opalinus clay have been modest and reduced to zones quite close to the tunnel.
CitationGaritte, Benoit; Gens Solé, Antonio. Elastoplastic modelling of a ventilation test in argillaceous rock. A: COMPLAS XIII. "COMPLAS XIII : proceedings of the XIII International Conference on Computational Plasticity : fundamentals and applications". Barcelona: CIMNE, 2015, p. 134-139.
URIhttp://hdl.handle.net/2117/77397
ISBN978-84-944244-6-5
Collections
Share: