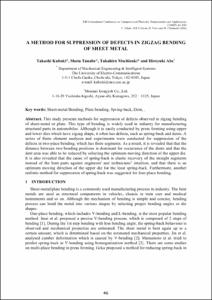 This study presents methods for suppression of defects observed in zigzag bending of sheet-metal or plate. This type of bending is widely used in industry for manufacturing structural parts in automobiles. Although it is easily conducted by press forming using upper and lower dies which have zigzag shape, it often has defects, such as spring-back and dents. A series of finite element analyses and experiments were conducted for suppression of the defects in two-place bending, which has three segments. As a result, it is revealed that that the distance between two bending positions is dominant for occurrence of the dents and that the dent area was able to be reduced by selecting the optimum moving direction of the upper die. It is also revealed that the cause of spring-back is elastic recovery of the straight segments instead of the bent parts against engineers' and technicians'' intuition, and that there is an optimum moving direction of the upper die for the least spring-back. Furthermore, another realistic method for suppression of spring-back was suggested for four-place bending.
CitationTanabe, Shota [et al.]. A Method for suppresion of defects in zigzag bending of sheet metal. A: COMPLAS XIII. "COMPLAS XIII : proceedings of the XIII International Conference on Computational Plasticity : fundamentals and applications". Barcelona: CIMNE, 2015, p. 46-54.
URIhttp://hdl.handle.net/2117/77342
ISBN978-84-944244-6-5