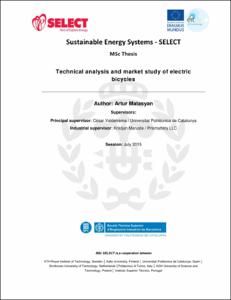 Except where otherwise noted, content on this work is licensed under a Creative Commons license : Attribution-NonCommercial-NoDerivs 3.0 Spain
Abstract
This thesis project was done in collaboration with a Prismattery LLC, which is based in Tallinn, Estonia and is interested in entering the market of electric bicycles. For that reason in this report a detailed study concerning the market of electrical bicycles, its current situation and trends were performed and a promising target market was indicated. The market study showed that although in different countries the specifications and preferred types of electric bicycles may vary, in general the popularity of this type of transportation rises over the world. Furthermore, as nowadays bicycle sharing systems are very common in many cities, the working principles of these systems and companies who produce them were also investigated within the scope of the project. Subsequently, based on the information examined an electric bicycle sharing systems were detected to be the best market choice for the company to aim, and therefore further work in the technical and environmental analysis was done taking into consideration the requirement of the selected market. Moreover, although compared to regular bicycle sharing systems electric ones require higher capital investment, the cost of operation can be lower due to the savings on the redistribution of bicycles. It is explained by the fact that users of electric bicycles can go uphill without much physical effort and as a result the natural distribution of electric bicycles in stations can be more equal than it is for regular bicycle sharing systems. Therefore, both investment and operation costs were compared for regular and electric bicycle sharing system for 10 years of exploitation and results proved the cost competitiveness of the electric bicycle sharing system. Different technological solutions concerning the components of electric bicycles were studied in the report in order to understand their working principle, functionality, advantages and disadvantages, etc. Thus, the choice of these components was done in a way to suit the needs of electric bicycles which will operate in a sharing system. In addition an electric circuit which is necessary for the power supply at the bicycle docking station was designed and an automatic charging solution was suggested to charge the battery of the bicycle through special contacts connected to the locking system. Finally, in the environmental analysis it was estimated the possible reduction of greenhouse gases and air pollutants in case of using an electric bicycle sharing system as an option for urban transportation for short distances. It was calculated that this types of systems in a large scale of operation can have some input in reducing these emissions, and hence improving the health of the local population as well as the global climatic conditions.
Location
1: Old Town of Tallinn, Tallinn, Estònia
URIhttp://hdl.handle.net/2117/77272
Collections
Share: