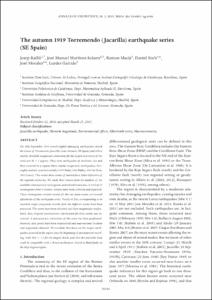 On 10th September 1919 several slightly damaging earthquakes struck the towns of Torremendo, Jacarilla (near Alicante, SE-Spain) and others nearby. Available magnitude estimations for the largest two events of the series are M = 5 approx. They were earthquakes of moderate size and they occurred in a region where similar magnitude earthquakes, thoroughly studied, occurred recently (1999 Mula; 2002 Bullas; 2005 La Paca; 2011 Lorca). This makes these events of interest for a better definition of the regional seismicity. We study their sources from the analysis of the available contemporary seismograms and related documents. A total of 23 seismograms from 9 seismic stations have been collected and digitized. These seismograms contain records for the two main events and several aftershocks of the earthquake series. Finally 44 files, corresponding to 44 recorded single component records from the different events have been processed. The events have been relocated and their magnitudes recalculated. Also, original macroseismic information for these events was recovered. A macroseismic evaluation of the series has been performed. Intensity data points have been recalculated and macroseismic location and magnitude obtained. We conclude that these are the largest earthquakes occurred in the region since the beginning of instrumental recording, with Mw = 5.5 for the largest shock, and that the available data could be compatible with a thrust mechanism related to blind faults in the Bajo Segura region.
CitationBatlló, J., Martinez, J., Macia, R., Stich, D., Morales, J., Garrido, L. The autumn 1919 Torremendo (Jacarilla) earthquake series (SE Spain). "Annals of geophysics", 01 Gener 2015, vol. 58, núm. 3.
URIhttp://hdl.handle.net/2117/77262
DOI10.4401/ag-6686
ISSN1593-5213