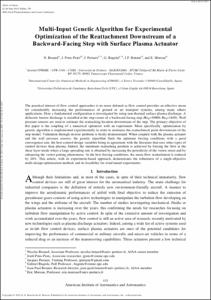 Bonnet, J.P.
Moreau, E.
Document typeConference report
PublisherAmerican Institute of Aeronautics and Astronautics (AIAA)
Rights accessOpen Access
Abstract
The practical interest of flow control approaches is no more debated as flow control provides an effective mean for considerably increasing the performances of ground or air transport systems, among many others applications. Here a fundamental configuration is investigated by using non-thermal surface plasma discharge. A dielectric barrier discharge is installed at the step corner of a backward-facing step (Reh=30000, Re¿=1650). Wall pressure sensors are used to estimate the reattaching location downstream of the step. The primary objective of this paper is the coupling of a numerical optimizer with an experiment. More specifically, optimization by genetic algorithm is implemented experimentally in order to minimize the reattachment point downstream of the step model. Validation through inverse problem is firstly demonstrated. When coupled with the plasma actuator and the wall pressure sensors, the genetic algorithm finds the optimum forcing conditions with a good convergence rate, the best control design variables being in agreement with the literature that uses other types of control devices than plasma. Indeed, the minimum reattaching position is achieved by forcing the flow at the shear layer mode where a large spreading rate is obtained by increasing the periodicity of the vortex street and by enhancing the vortex pairing phenomena. At the best forcing conditions, the mean flow reattachment is reduced by 20%. This article, with its experiment-based approach, demonstrates the robustness of a single-objective multi-design optimization method, and its feasibility for wind tunnel experiments.
CitationBenard, N., Pons, J., Périaux, J., Bugeda, G., Bonnet, J., Moreau, E. Multi-input genetic algorithm for experimental optimization of the reattachment downstream of a backward-facing step with surface plasma actuator. A: 46th AIAA Plasmadynamics and Lasers Conference. "46th AIAA Plasmadynamics and Lasers Conference". Dallas: American Institute of Aeronautics and Astronautics (AIAA), 2015, p. 1-23.
URIhttp://hdl.handle.net/2117/77252
Publisher versionhttps://www.aiaa.org/EventDetail.aspx?id=21016
Collections
Share: