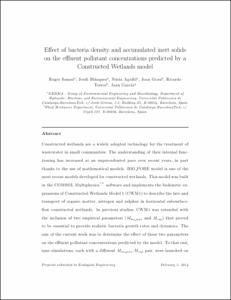 Document typeArticle
Rights accessOpen Access
Abstract
Constructed wetlands are a widely adopted technology for the treatment of wastewater in small communities. The understanding of their internal functioning has increased at an unprecedented pace over recent years, in part thanks to the use of mathematical models. BIO_PORE model is one of the most recent models developed for constructed wetlands. This model was built in the COMSOL Multiphysics (TM) software and implements the biokinetic expressions of Constructed Wetlands Model 1 (CWM1) to describe the fate and transport of organic matter, nitrogen and sulphur in horizontal subsurface-flow constructed wetlands. In previous studies, CWM1 was extended with the inclusion of two empirical parameters (M-bio_max and M-cap) that proved to be essential to provide realistic bacteria growth rates and dynamics. The aim of the current work was to determine the effect of these two parameters on the effluent pollutant concentrations predicted by the model. To that end, nine simulations, each with a different M-bio_max-M-cap pair, were launched on a high-end multi-processor computer and the effluent COD and ammonia nitrogen concentrations obtained on each simulation were qualitatively compared among them. Prior to this study, a finite element mesh optimization procedure was carried out to reduce computational cost. Results of the mesh optimization procedure indicated that among the 5 tested meshes of different element size, the mesh utilized for this model in previous studies represented a fair compromise between output accuracy and computation time. Results of the sensitivity analysis showed that the value of M-cap has a dramatic effect on the simulated effluent concentrations of COD and ammonia nitrogen, which clearly decreased for increasing values of this parameter. On the other hand, the model output was also sensitive to the values of M-bio_max, but its effects were less important and no clear relation could be established between its value and the simulated effluent concentration of COD and ammonia nitrogen. (C) 2014 Elsevier B.V. All rights reserved.
CitationSamso, R., Blazquez, J., Agullo, N., Grau, J., Torres, R., Garcia, J. Effect of bacteria density and accumulated inert solids on the effluent pollutant concentrations predicted by the constructed wetlands model BIO_PORE. "Ecological engineering", 01 Juliol 2015, vol. 80, p. 172-180.
URIhttp://hdl.handle.net/2117/77227
DOI10.1016/j.ecoleng.2014.09.069
ISSN0925-8574
Collections
Share: