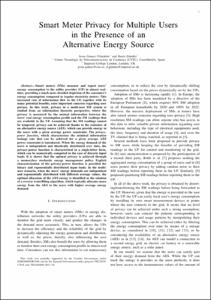 Smart meters (SMs) measure and report users’ energy consumption to the utility provider (UP) in almost realtime, providing a much more detailed depiction of the consumer’s energy consumption compared to regular electricity meters. This increased rate of information flow to the UP, together with its many potential benefits, raise important concerns regarding user privacy. In this work, privacy in a multi-user SM system is studied from an information theoretic perspective, where the privacy is measured by the mutual information between the users’ real energy consumption profile and the SM readings that are available to the UP. Assuming that the SM readings cannot be tempered, privacy can be achieved thanks to the existence of an alternative energy source (AES), which can provide energy to the users with a given average power constraint. The privacypower function, which characterizes the minimal information leakage rate that can be achieved for a given average AES power constraint is introduced. When the energy demand of the users is independent and identically distributed over time, the privacy-power function is characterized in a single-letter form, which can be numerically computed in the case of discrete input loads. It is shown that the optimal privacy is achieved through a memoryless stochastic energy management policy. Explicit characterization of the privacy-power function is provided for binary and exponentially distributed input loads. In the multiuser scenario, when the users’ energy demands are independent and exponentially distributed with different average values, the optimal allocation of the AES energy is identified as the solution of a reverse waterfilling algorithm, which typically allocates more energy from the AES to the users with higher average energy demand.

© 2014 IEEE. Personal use of this material is permitted. Permission from IEEE must be obtained for all other uses, in any current or future media, including reprinting/republishing this material for advertising or promotional purposes, creating new collective works, for resale or redistribution to servers or lists, or reuse of any copyrighted component of this work in other works.
CitationGomez-Vilardebo, Jesús; Gündüz, Denis. Smart Meter Privacy for Multiple Users in the Presence of an Alternative Energy Source. IEEE Transactions on Information Forensics and Security. 27 Octubre 2014, vol. 10, núm. 1, p. 132-141.
URIhttp://hdl.handle.net/2117/77206
ISSN1556-6013
Publisher versionhttp://ieeexplore.ieee.org/stamp/stamp.jsp?arnumber=6737027